It tells the reader what happened with the former family estate of the poet’s mother in the village Hantanovo in the post-revolutionary period and the years of the Great Patriotic war. The booklet is also about the rise of public initiatives aimed at restoring historical and architectural features of the memorable place, where K.N. Batyushkov created and prepared for printing his best literary works including the famous book “Experiments in verse and prose”.

The booklet contains materials concerning installation of the commemorative plaque at the memorial stone on border of the former family estate; the greening and dedication of this territory by spiritual Father George; the organizing (beginning from 1998) of the annual literary and theatrical celebrations “Paternal Penates”. In this booklet we can find the photo of the estate’s layout, designed by students of Cherepovets State University under the direction of Dmitriy Vladimirovich Medvedev, honored art worker of the Russian Federation, one of the founders of “Batyushkov Society”.

The authors of the text of the booklet are Valentina Dmitriyevna Chusova – the 1st President of the organization, a tireless promoter of Batyushkov’s literary works and Victor Leonidovich Leontyev – the headmaster of a general secondary school in the village Myaksa. Print run is 500 copies.

The second edition of the organization – the collection of scientific papers “Batyushkov. Investigations and materials” – was published in 2002 under the editorship of the author Rimma Mihaylovna Lazarchuk, doctor of philological Sciences, professor of Cherepovets State University (unfortunately, untimely dead). 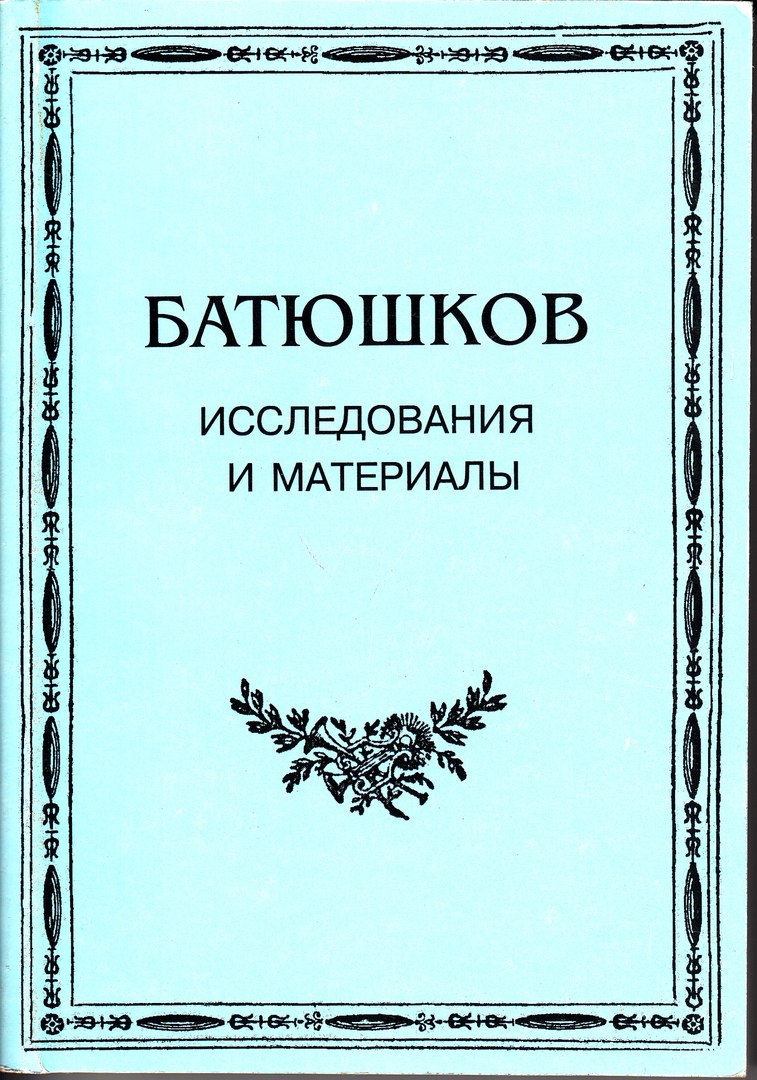 The collection contains articles, devoted to the unexplored problems of biography and literary works of K.N. Batyushkov, and publications of letters to the poet. The editorial board of the collection includes doctors of Philological Sciences, V.A. Koshelev (Velikiy Novgorod), T.A. Ponomareva (Cherepovets), A.S. Yanykevich (Tomsk), as well as the teacher-scholar, V.D. Chusova (Cherepovets).

The book is published with the financial support of the administration of Cherepovets, Sheksna linear production management of mainline gas pipelines, Cherepovets House of books “Bibliosphere” and municipal unitary enterprise “Cherepovetsbook”. This book is for high school teachers-philologists, teachers of literature, students of humanitarian faculties and specialists of local history. Print run is 200 copies, 380 p. ISBN 5-85341-051-3.

The 3rd edition – “Dedication to Batyushkov” – was published in 2005 and collected more than 30 poems addressed to the poet’s friend. The collection opens with the introductory article of V.D. Chusova with the symbolic title “The word of Batyushkov lives”. It includes quotations of famous critics and poets about K.N. Batyushkov. Some of them are:

“Batyushkov contributed a lot to the fact that Pushkin became the poet he was supposed to be. This one merit from Batyushkov is enough for his name to be pronounced with love and respect” (V.G. Belinskiy).

“Batyushkov is a notebook of an “unborn” Pushkin…” (O. Mandelshtam).

The engraving “The Portrait of Batyushkov” by D.V. Medvedev was used for the design of the collection’s cover.

The edition was issued with the financial support of the administration of Cherepovets, Sheksna linear production management of mainline gas pipelines, publishing house “Port-April”. Print run – 200 copies, 96 p. with illustrations. 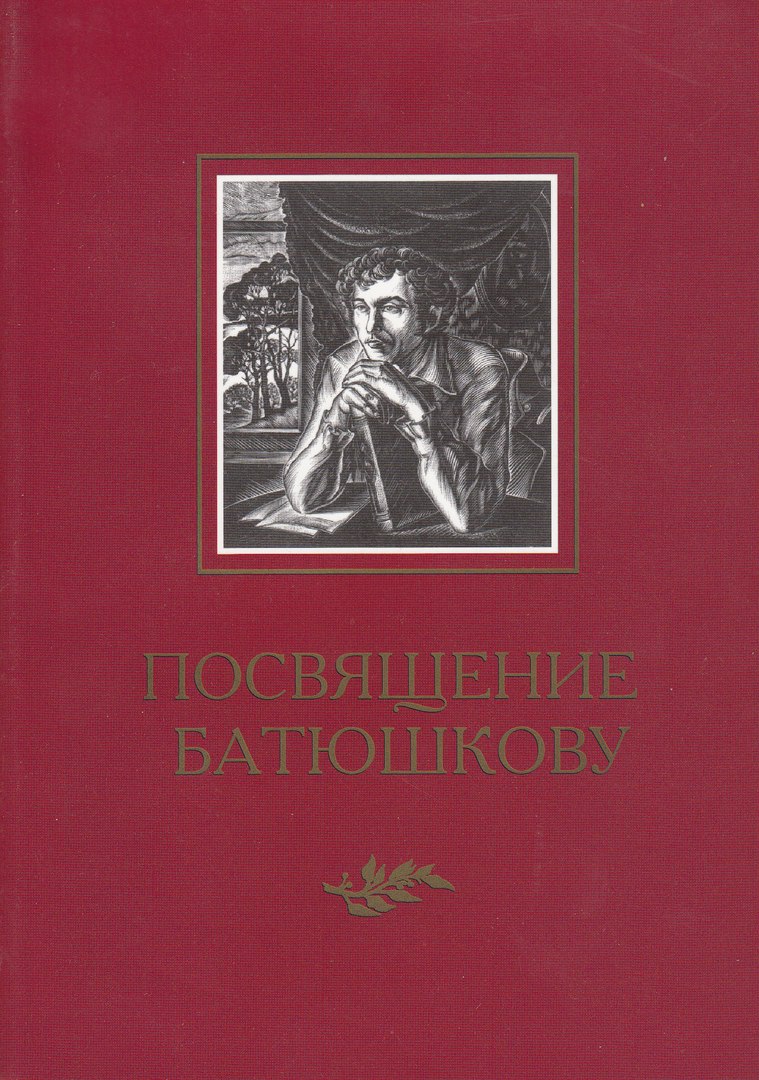 The local history collection “Collection of various chapters”: about K.N. Batyushkov and Hantanovo” (Cherepovets, publishing house “Port-April”, 2007, republished in 2012) is intended for a wide circle of admirers of Batyushkov’s poetic talent and includes materials connected with the estate which belonged to the family of K.N. Batyushkov – Hantanovo.

The major part of these materials is of documentary nature, and it contains the memories of descendants of serfs who lived in the Batyushkov’s estate. Richly illustrated with the photos of V.L. Leontyev, V.I. Filippova and V.P. Shilova, the material of the collection tells a reader about true stories and legends of Hantanovo, about unusual phenomena that constantly occur here (according to the stories of many eyewitnesses).

The collection ends with the script of the evening “Three wars, all of them on horseback and in the world on high road…” (the author – V.D. Chusova). 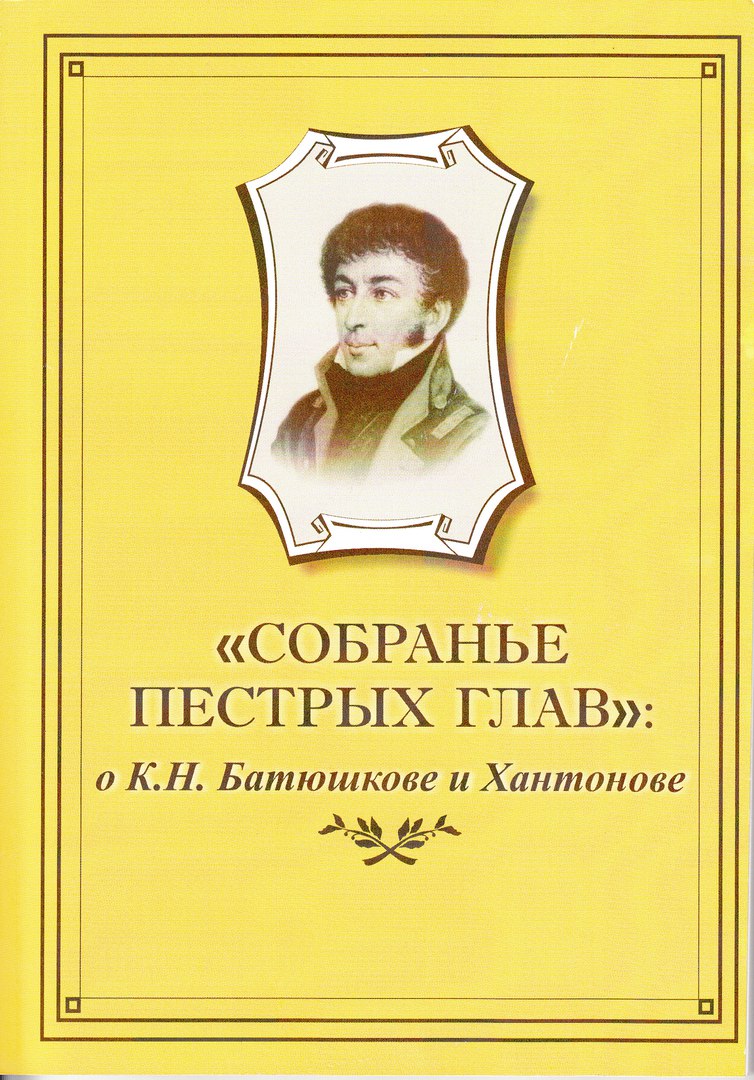 The issue and the presentation of the edition took place on the eve of the 220th anniversary of the poet’s birth. The authors of the collection are the members of “Batyushkov Society”: I.A. Klimina, Z.S. Lelyanova, V.L. Leontyev, N.V. Fominyh, V.D. Chusova. Print run – 300 copies, 176 p. with illustrations.

The 5th edition called “Life and love for the Motherland” (Batyushkov’s line) was published in 2012 with the financial support of PAO “Severstal”. It presents the collection of local history materials which includes materials about the people of the 19th century, who dedicated their lives to serving their Motherland: K. N. Batyushkov (the article of V.D. Chusova “Paternal Penates” in the life and creative works of K.N. Batyushkov), V.I. Lovkov (the article “Fellow countrymen” of the poet-historian of St. Petersburg V.A. Kolodyazhnyi), Mother Superior Taisya Solopova (the article of S.V. Ivanova “The soul is longing for heaven”). All these people were directly related to the events which still fill spiritual life of the villages Myaksa and Hantanovo. 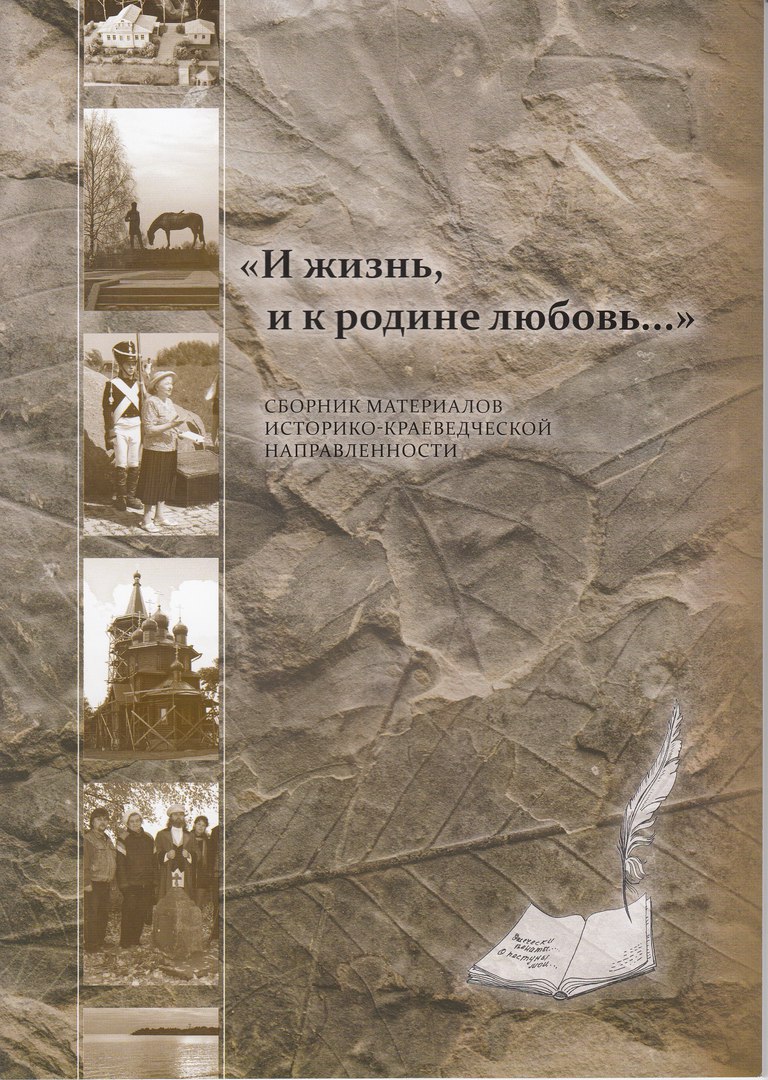 The collection is addressed to a wide circle of readers: poetry lovers, historians, teachers of history and literature, students, pupils and everyone who is interested in the historical past of the village Myaksa, where Leyshinskiy Ioanno-Predtechenskiy convent is being reborn. The collection was sent to all school libraries of Cherepovets and Cherepovets municipal district. Print run – 1500 copies, 80 p. with illustrations. ISBN 978-5-91958-005-8.

In 2014 the literary regional historical collection “Ledges of Hantanovo” was presented as a part of the regional historical festival of youth creativity in honour of the 200th anniversary of foreign campaigns of the Russian army and the conquest of Paris, held by “Batyushkov Society” (the authors are A.N. Volkov, I.A. Klimina, E.V. Maksimova, V.I. Filippova under the general editorship of A.N. Volkov – Cherepovets, 2014. 126 p. The cover of the collection was designed by V.I. Filippova. 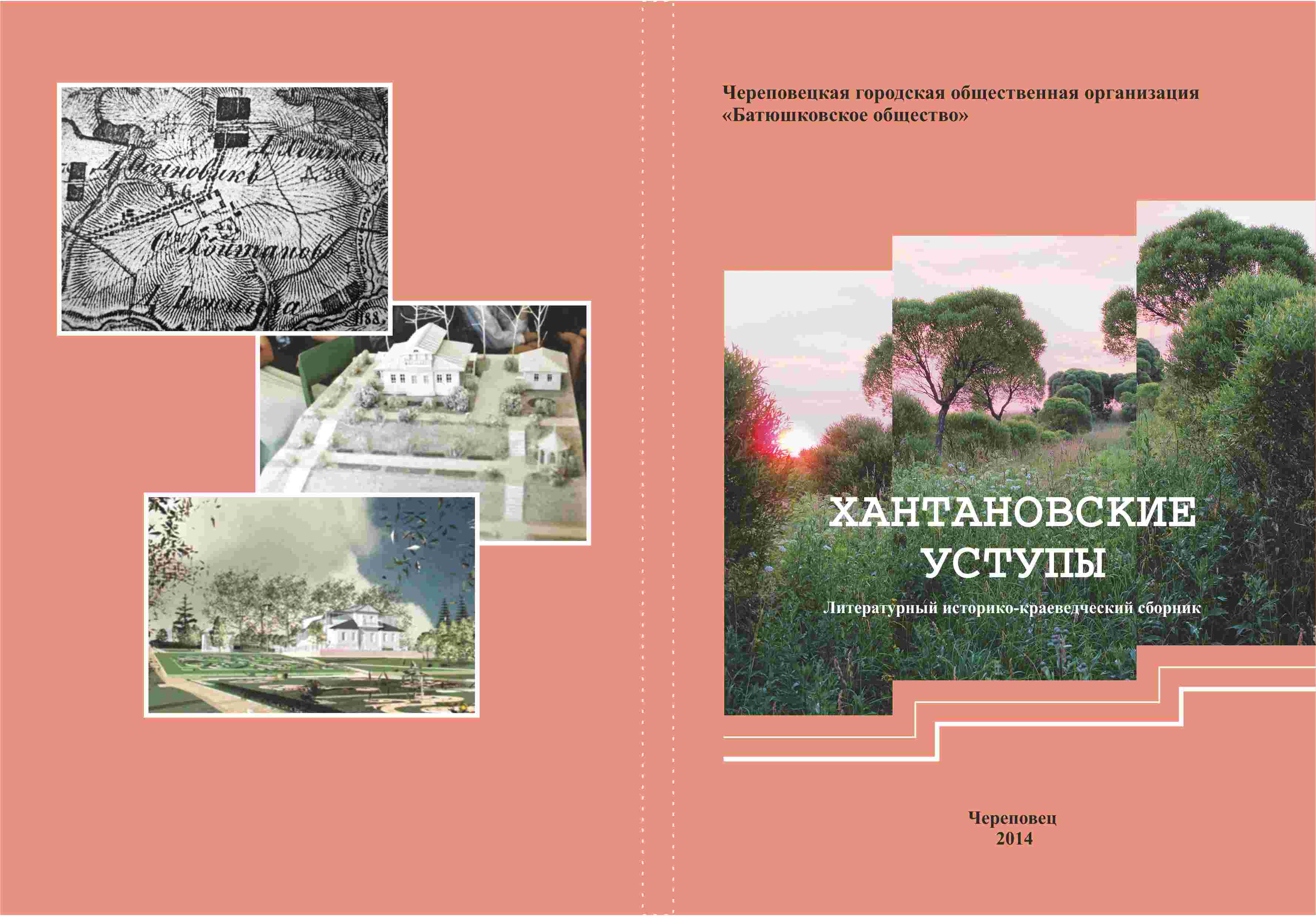 The collection was created by means of Grant from the Government of the Vologda Region and contains a number of publications, revealing the talent of K.N. Batyushkov as a writer of prose and a patriot of his Motherland. Our contemporaries, participants and winners of the creative competition “Not in vain the whole Russia remembers!” addressed new poetic messages to Batyushkov, who was the first to glorify Vologda land in his poems. Print run – 200 copies, ISBN 978-5-85341-612-3.

Another booklet "K.N. Batyushkov in the fate of Russia. To the 230th anniversary of the poet’s birth” (compiled by A.N. Volkov, designed by E.A. Khudueva), dedicated to the anniversary date of the outstanding poet of the Vologda Region, was issued and presented in May, 2017.

The authors of the placed in materials aimed to show the life and literary work of K.N. Batyushkov in the context of evaluations given by representatives of different generations of writers and researchers, as well as to emphasize the significance of cultural and historical heritage, left by the poet, for the Vologda Region and Russia.

On edition pages a reader will find the quotations of K.N. Batyushkov reflecting his views on poetry in close connection with the surrounding world, on a special role of moral principals in “the poet’s life”. One will also find here the map with the places visited by K.N. Batyushkov in Russia and in Europe; get acquainted with the work of the public organization “Batyushkov Society” established in 2000 and the history of the museum exhibits related to the name of Batyushkov and stored in the Pushkin House (department “Museum of Gavriil Derzhavin and Russian Literature of His Time”).

The edition was published with the support of Grant given by the Presidential Fund “Perspective” for the realization of the project “Regional programme “Paternal Penates” (on the basis of educational institutions of Cherepovets municipal district of the Vologda Region)”.

A new edition containing materials about the life and literary work of K.N. Batyushkov was published under the editorship of the members of “Batyushkov Society” in the publishing house OOO “Publishing house-Print” (Cherepovets) at the end of May, 2017.: 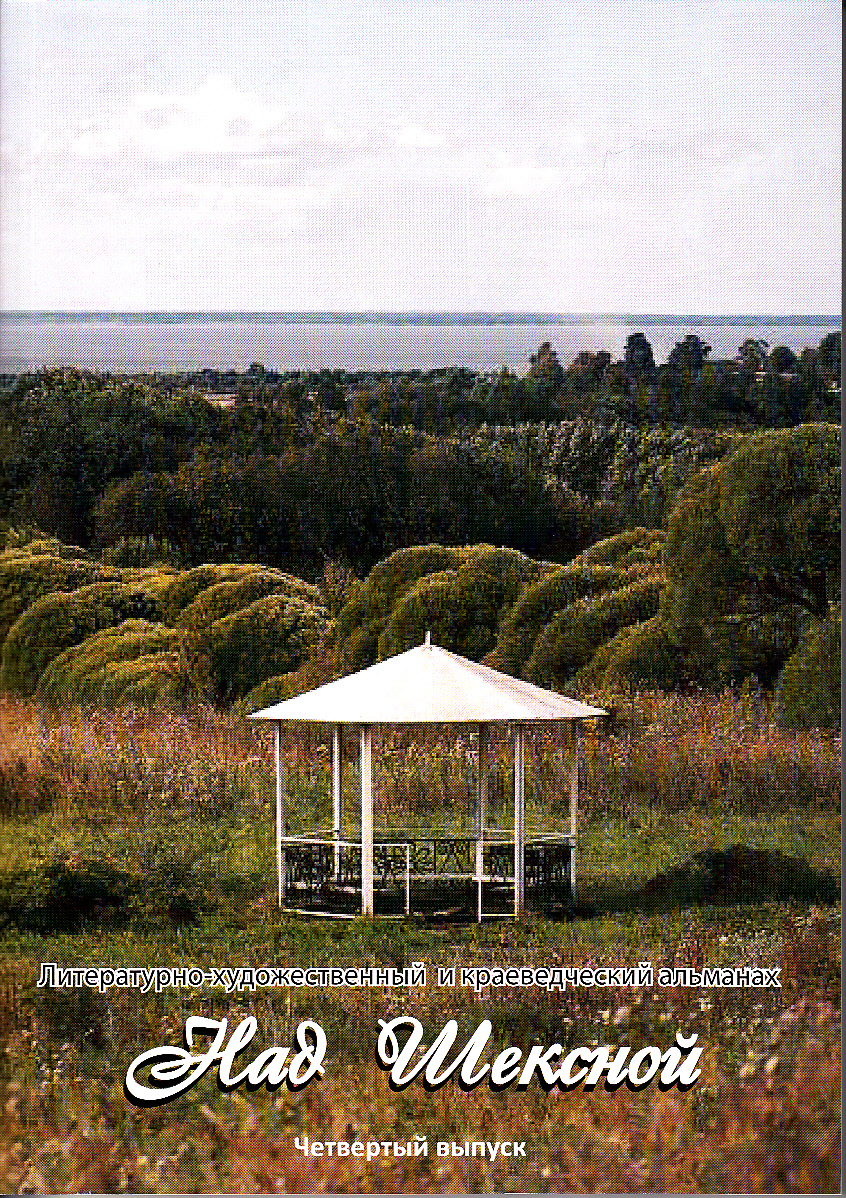 Presentation of the literary almanac was a part of the traditional literary-cultural festival “Paternal Penates-2017”, held in the villages Myaksa and Hantanovo in honour of the anniversary date of the outstanding poet K.N. Batyushkov. The author of the project is the poetess Elena Maksimova. The editorial board includes Anatoliy Volkov, Ida Klimina and Nikolay Kuznetsov.

Despite the “anniversary” shade of individual materials included in the literary almanac, the reader will certainly find interesting the thoughts of K.N. Batyushkov about the poet and poetry, as well as the information about the battle route of the poet-warrior and the relics connected with his name and kept in the Pushkin House in St. Petersburg. All these materials and other articles and poems, dedicated to the poet, writer of prose, translator, art critic and literary master of A.S. Pushkin, don’t only expand the sources of publications of “Batyushkov Society”, but also show the scale of the personality of K.N. Batyushkov who has now become a literary brand of the Vologda Region. 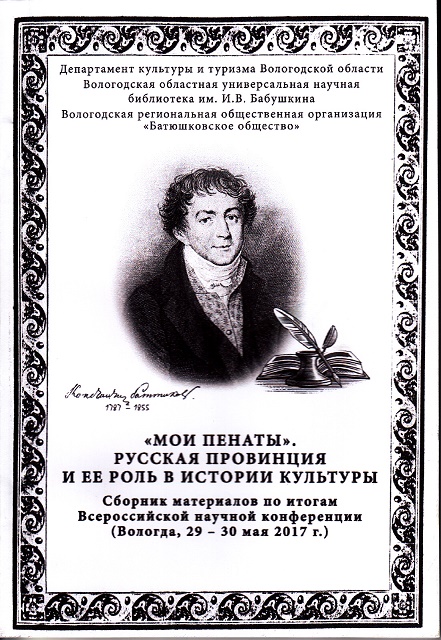 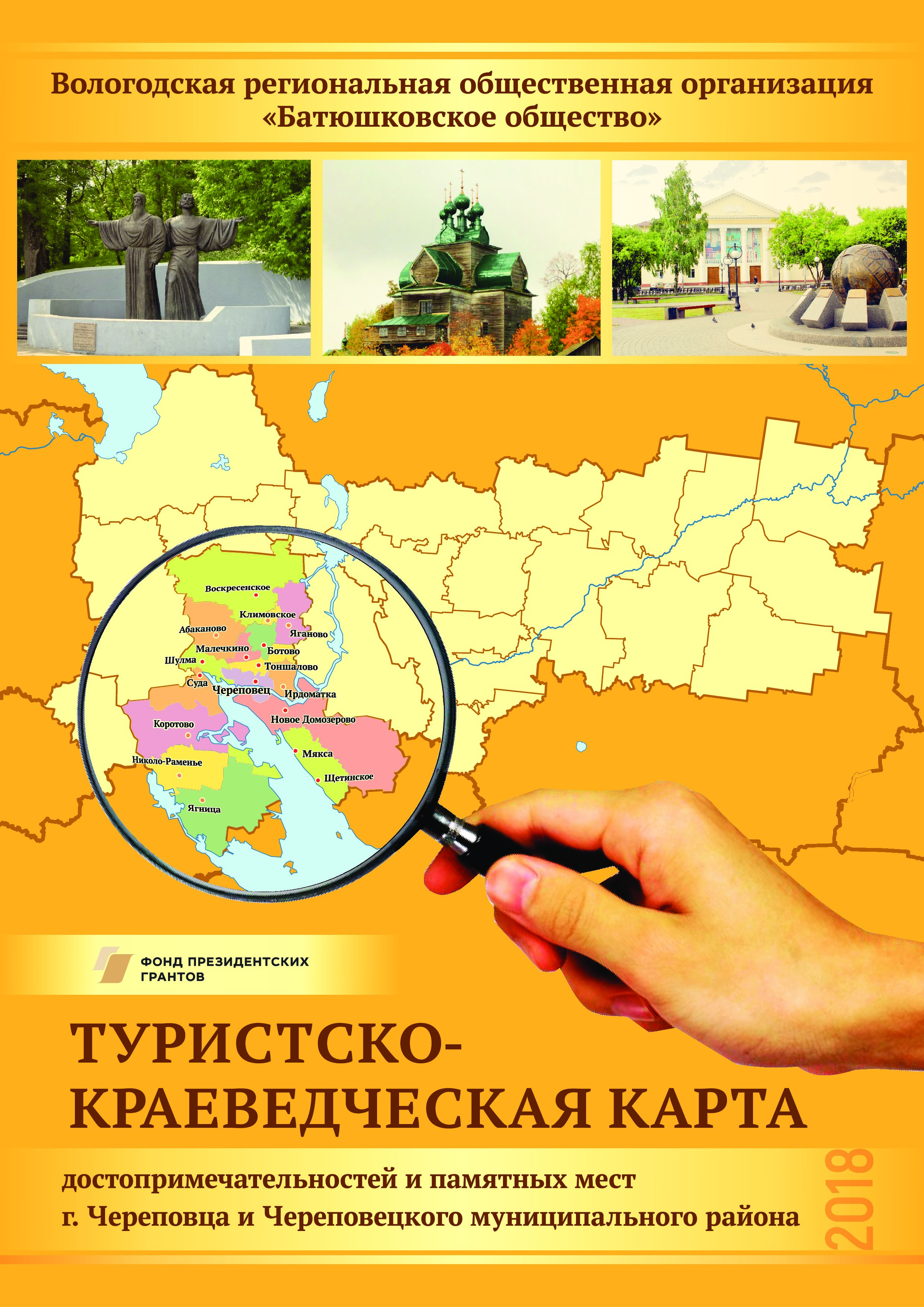 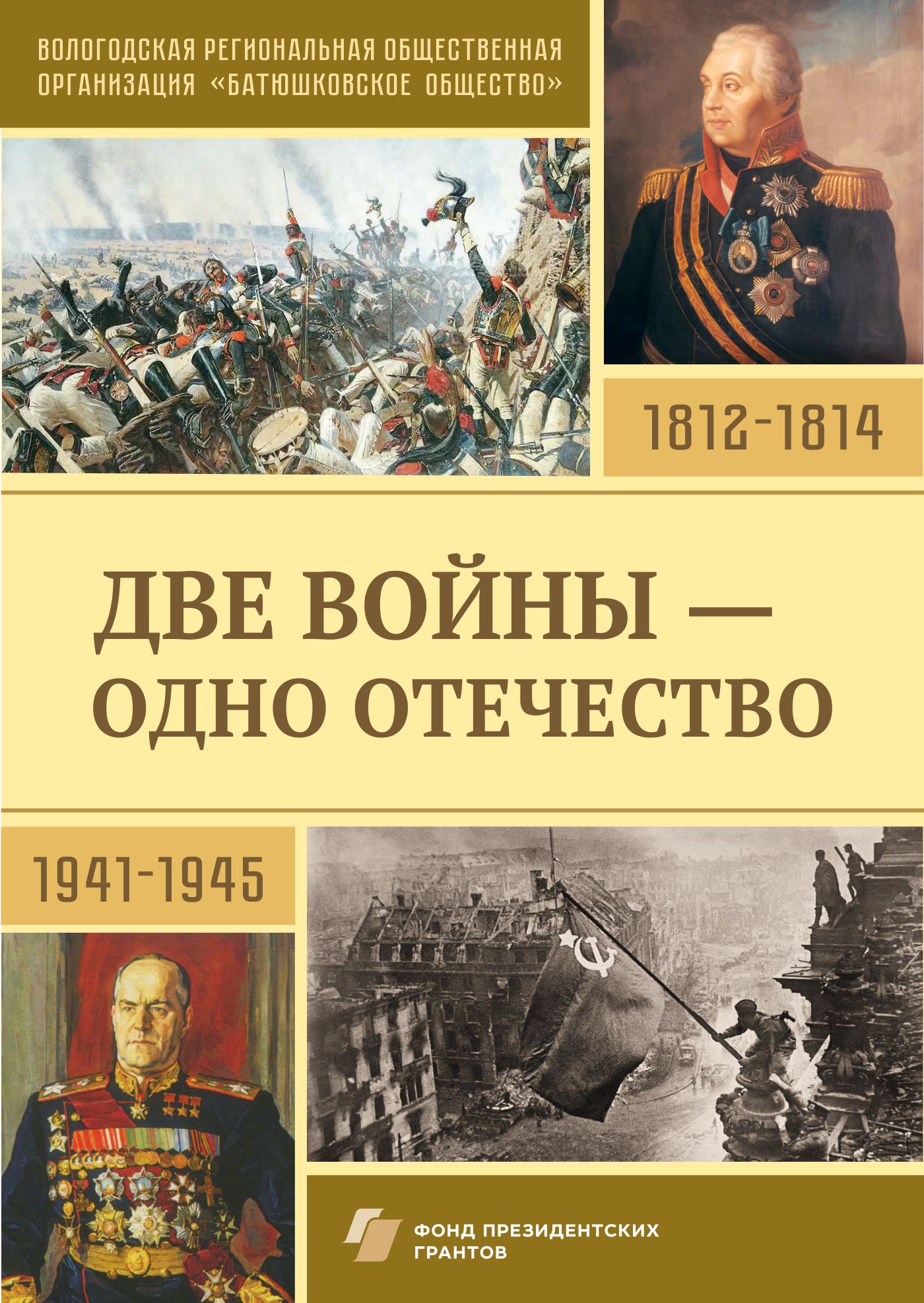 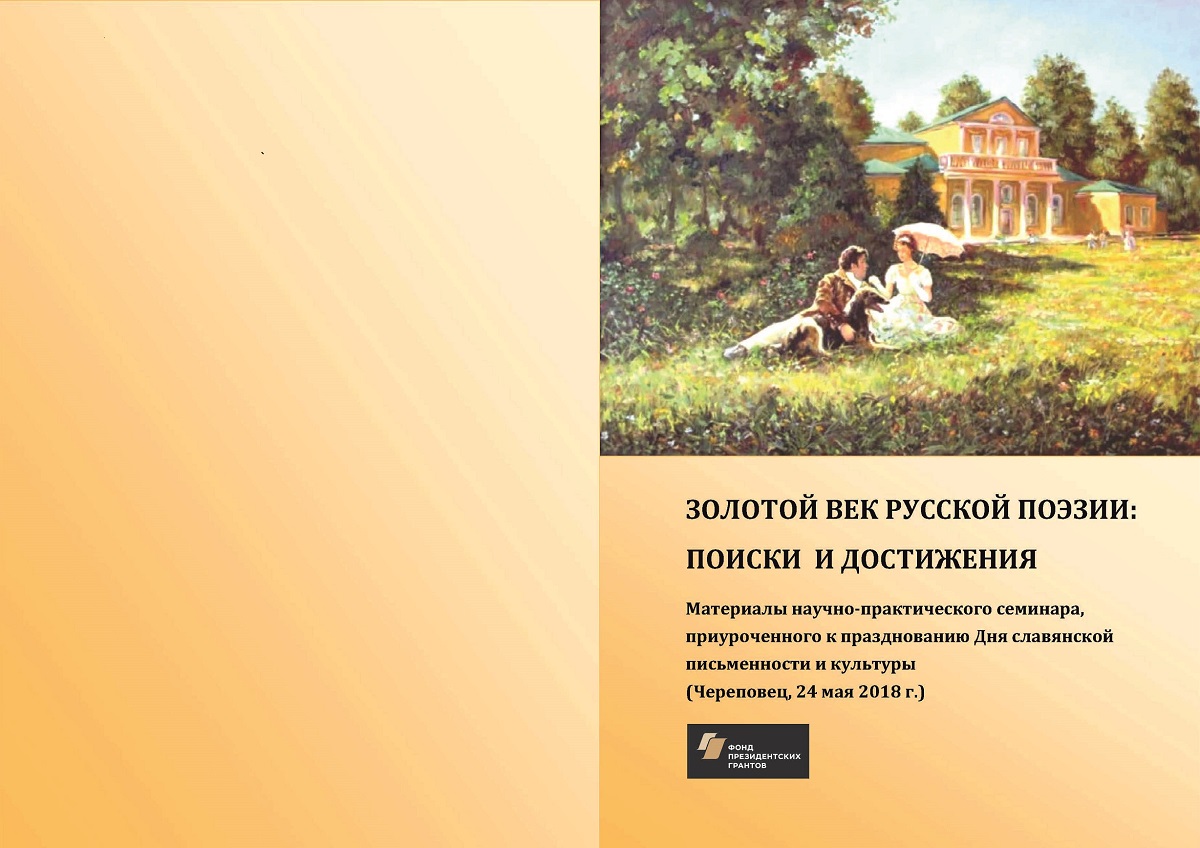 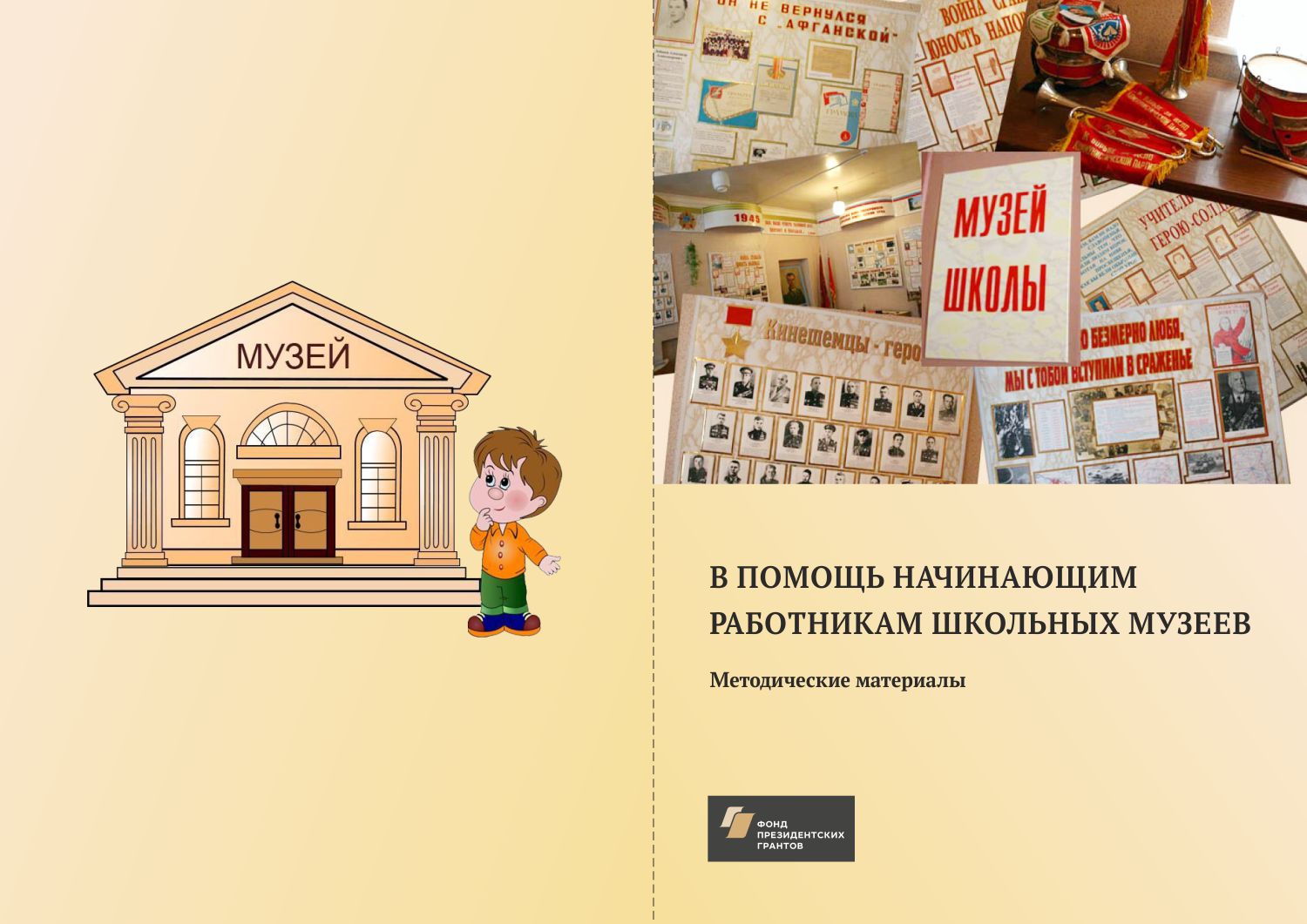