Konstantin Nikolayevich Batyushkov – a poet, novelist, literary and art critic, translator, member of the literary circle “Arzamas”, honorary member of the “Free society of lovers of the Russian literature”. 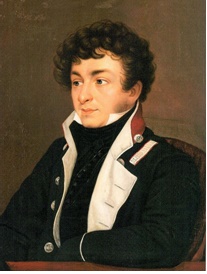 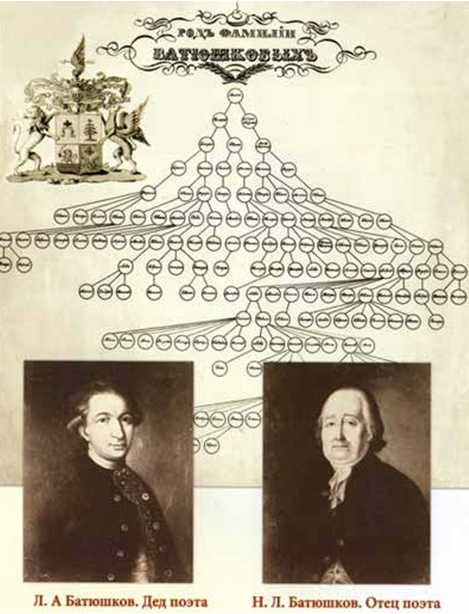 1801 – the first literary experience – translation into French “The words of Metropolitan Platon on the occasion of coronation of Alexander the First”. The translation was issued in the autumn of 1801 in a separate brochure by P.A. Sokolov, poshekhonskiy landowner.

1802 – determined to serve in a newly organized Ministry of national education “at written work”.

1803 – received the 1st “service” rank of a collegiate registrator. Became friends with the members of the “Free society of lovers of literature, sciences and art”: I. P. Pnin, I.I. Martynov, D. I. Yazukov, N.A. Radischev. Got acquainted with G.R. Derzhavin, V.V. Kapnist, P.A. Nilov and A.P. Kvashnina-Samarina.

1804 – employed as a “Secretary to the Trustee of Moscow school district Secret Advisor Myravyov” after being discharged from the office of the Minister of national education, count P.V. Zavadskiy.

January, 1805 – debut in the press: “Message to my poetry” was printed in the journal “News of the Russian Literature”. 6 poems were published.

22 February, 1807 – appointed the head of St. Petersburg militia battalion and sent to the military campaign in Prussia against Napoleon. On the 29th of May Batyushkov was wounded in the battle at Heilsberg. June-July – treated in Riga.  August-September – a trip to Danilovskoye; the conflict with his father because of re-marriage; moving along with his sisters Alexandra and Varvara to the village Hantanovo situated in Cherepovets district, Novgorod province.

1808 – engaged in division of his late mother’s estate. On the 20th of May Batyushkov was awarded the order of St. Anna of the 3rd degree for bravery in the battle at Heilsberg. The end of September – returning to an active duty, involved in the military campaign to Finland. 4 poems were published.

1809 – got the rank of Lieutenant, but resigned. June – arrived in St. Petersburg. July-mid-December – lived in Hantanovo. On the 25th of December Batyushkov went to Moscow. 7 poems were published.

January-end of May, 1810 – lived in Moscow where he got acquainted with V.A. Zhukovskiy, P.A. Vyazemskiy, N.M. Karamzin, V.L. Pushkin and S.L. Pushkin, M.T. Kachenovskiy, S.N. Glinka and others. July-December – spent in Hantanovo. More than 20 poems and a “pile of prose” were written during the year. On the 25th of December he went to Vologda.

Early February, 1811 – arrived in Moscow and lived until July. From the 14th of July until the end of the year Batyushkov lived in Hantanovo: he read and translated Italian poets, was engaged in household duties. Created the message “My land”, several minor poems and the essay “A walk around Moscow”. 4 poems were published.

January-August, 1812 – lived in St. Petersburg. On the 8th of February was accepted into the “Free society”. On the 22nd of April he entered the service in the Public library as an assistant keeper of manuscripts. On the 18th of December Batyushkov was dismissed from the Public library because of receipt on military service. 12 poems were written. The poem “Fellowship” was published.

24 July, 1813 – went to the army. On the 15th of August he participated in the battle neat Teplitsa (Germany); on the 4th-6th of October in the “Battle of Nations” in Leipzig, in which General N.N. Rayevskiy was wounded, and a close friend of Batyushkov, I. Petin, died. The message “To Dashkov” was published.

1814 – awarded the order of St. Anna of the 2nd degree for the battle of Leipzig. On the 19th of March in the retinue of Alexander the First Batyushkov entered Paris. Not later than the 10th of July arrived in St. Petersburg. “Elegy from Tibull”, “The Prisoner”, “On the ruins of a castle in Sweden” and in prose: “The letter to I.M. M(uravyov) – A(postol)” and “A walk to the Academy of Arts” were published.

14 October, 1815 – elected a member of the Society “Arzamas”. On the 4th of November made a request for resignation. 15 poems and 8 prose works were written: “A wander and a homelover” “A message to I.M.M(uravyov) – A(postol)”.

26 February, 1816 – together with Zhukovskiy was admitted into the “Society of lovers of Russian literature at Moscow University”. On the 26th of May at the meeting of the “Society…” he presented a “Speech about the influence of unserious verse on language”. At the end of December he arrived to Hantanovo. 8 poems and prose “A Night at Cantemir” were written. Prepared the 1st volume of “Experiments…” for printing.

1817 – until the end of July lived in Hantanovo. Prepared the 2nd volume of “Experiments...”. In early September “Experiments in poetry and prose” were published.

9 January, 1818 – returned to St. Petersburg. The trouble about entering the diplomatic service. The 16th of July – the decree of Alexander the First awarded to Batyushkov the rank of a court counsellor and attributed him to the Neapolitan mission. The 19th of November – departure to Italy. Seeing off in Tsarskoye Selo, which was attended by Zhykovskiy, A.S. Pushkin, N. I. Gnedich, A.I. Turgenev, E. S. Uvarov and P.L. Shilling. 17 poems were written in a year.

1819 – Batyushkov in Italy. The poems “You’re awake, oh Baya, from the tomb” and “There is pleasure in the wilderness of forests” were written.

1820 – reinforcement of depression. Submitted a request for vacation to the Waters of Germany and got rejected.

26 April, 1821 – got vacation for treatment. The 18th of September – resignation from service. The 12th of December – the 2nd resignation.

1822 – about the 17th of May Batyushkov left for the Caucasian mineral waters.

January – the beginning of April, 1823 – in Simferopol signs of mental disorder were increasing. On the 4th of April Batyushkov was sent to St. Petersburg.

January – mid May, 1824 – lived in St. Petersburg under the control of relatives and friends. On the 10th of May Zhukovskiy took Batyushkov to Derpt; from where he was sent to Sonnenstein and admitted into the hospital.

1824-1828 – A.I. Turgenev and N. I. Turgenev, D.V. Dashkov, V. A. Zhukovskiy, V.V. Hanykov visited Batyushkov in the hospital. The disease of Batyushkov on the medical consultation of German doctors was declared incurable.

1833 – Batyushkov was brought from Moscow to Vologda and placed into the family of his nephew G.A. Grevents.  On the 9th of December – the order of Nikolay the First to dismiss Batyushkov from service. 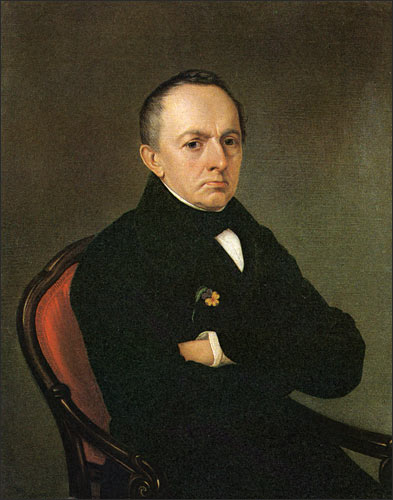 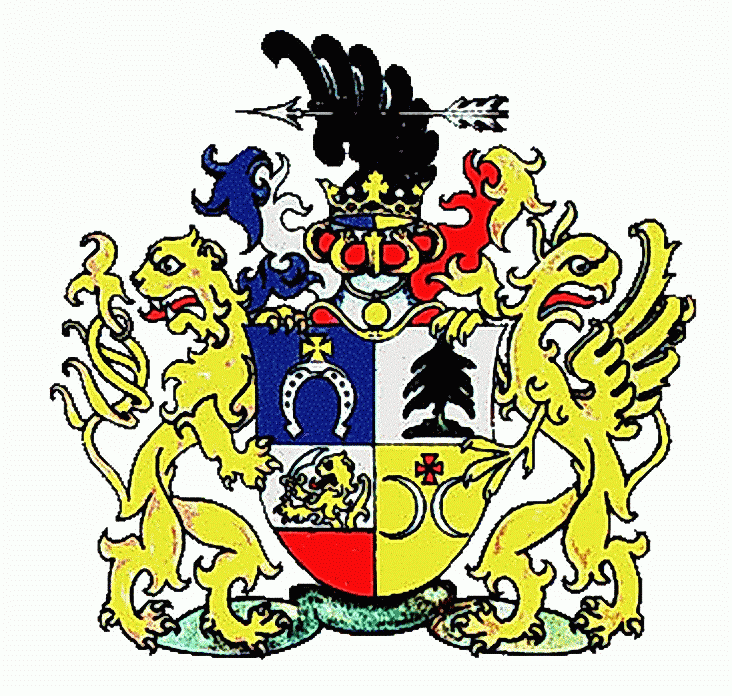 The Batyushkovs' family coat of arms