Historically, the monuments and busts to K.N. Batyushkov were installed on the territory of the Vologda Region: the monument in Vologda opened to the 200th anniversary of the poet’s birth (the 28th of May, 1987, sculptor – V. Klykov), the bust in Cherepovets (created and installed on the initiative and with direct participation of “Batyushkov Society”), which was opened on the eve of the city Day (the 3rd of November, 2012) in Batyushkova street (sculptor – A. Shchepelkin), and the bust in the village Danilovskoye on the territory of the existing Museum-estate of the Batyushkovs and A.I. Kuprin (Ustyuzhenskiy disctrict, the 31st of May, 1987, sculptor – V. Yudin). 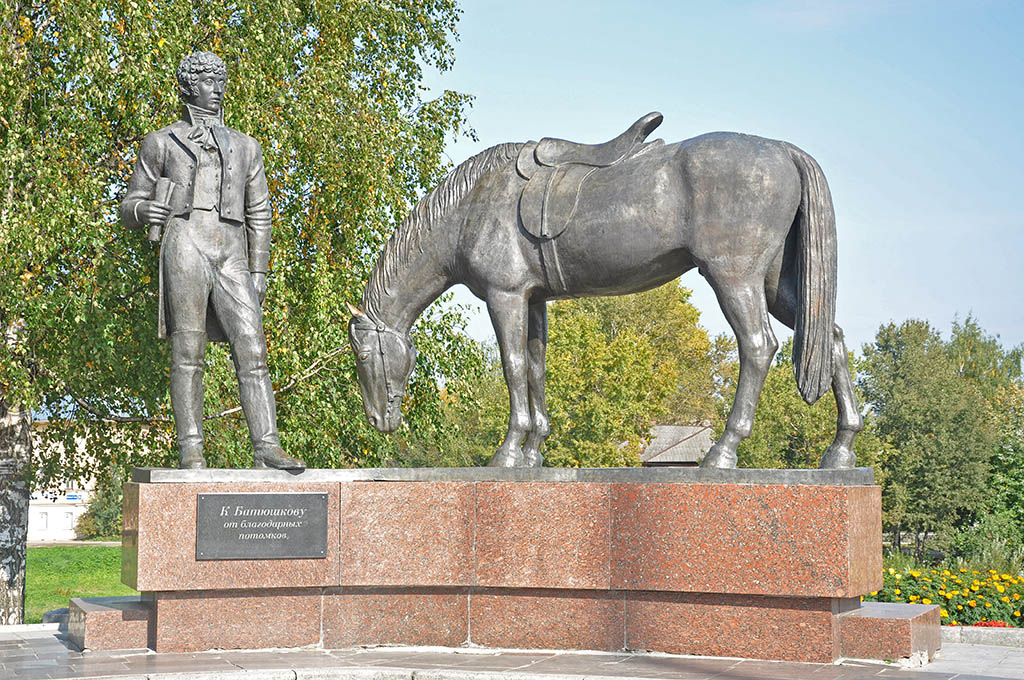 The monument to K.N. Batyushkov in Vologda 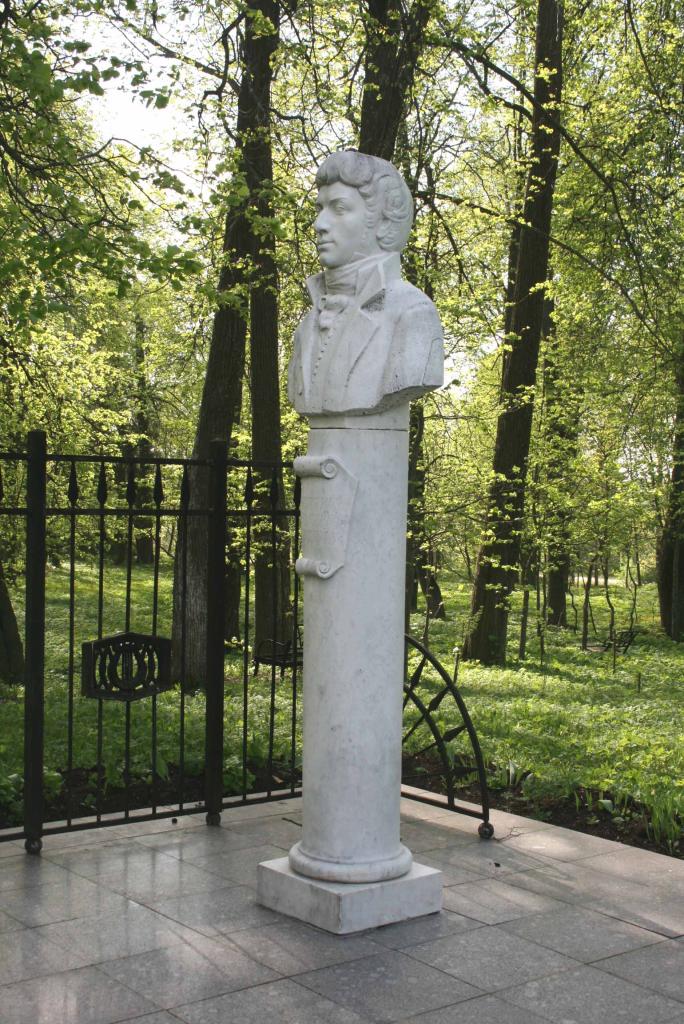 The bust of K.N. Batyushkov in the village Danilovskoye (Ustyuzhenskiy district of the Vologda Region) 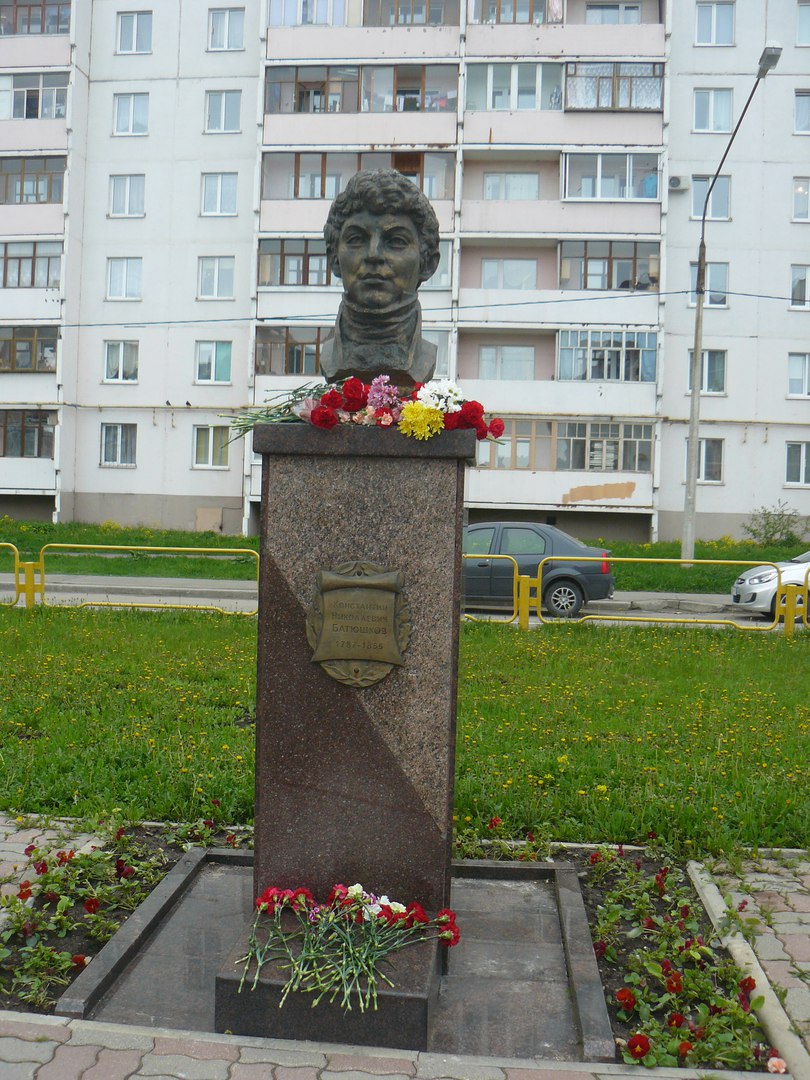 The bust of K.N. Batyushkov in Cherepovets

We also believe that it’s necessary to note the personal contribution of the members of “Batyushkov Society” to perpetuate the memory of K.N. Batyushkov on the Vologda land. So, in 1997, the year of the poet’s 210th anniversary, on the border of the former family estate of the poet’s mother in Hantanovo the commemorative plaque made by D.V. Medvedev (later he became one of the founders of the organization) was installed. It was installed at the memorial stone, preserved from the times when the buildings and the garden existed, on the initiative of the admirers of Batyushkov’s literary works. 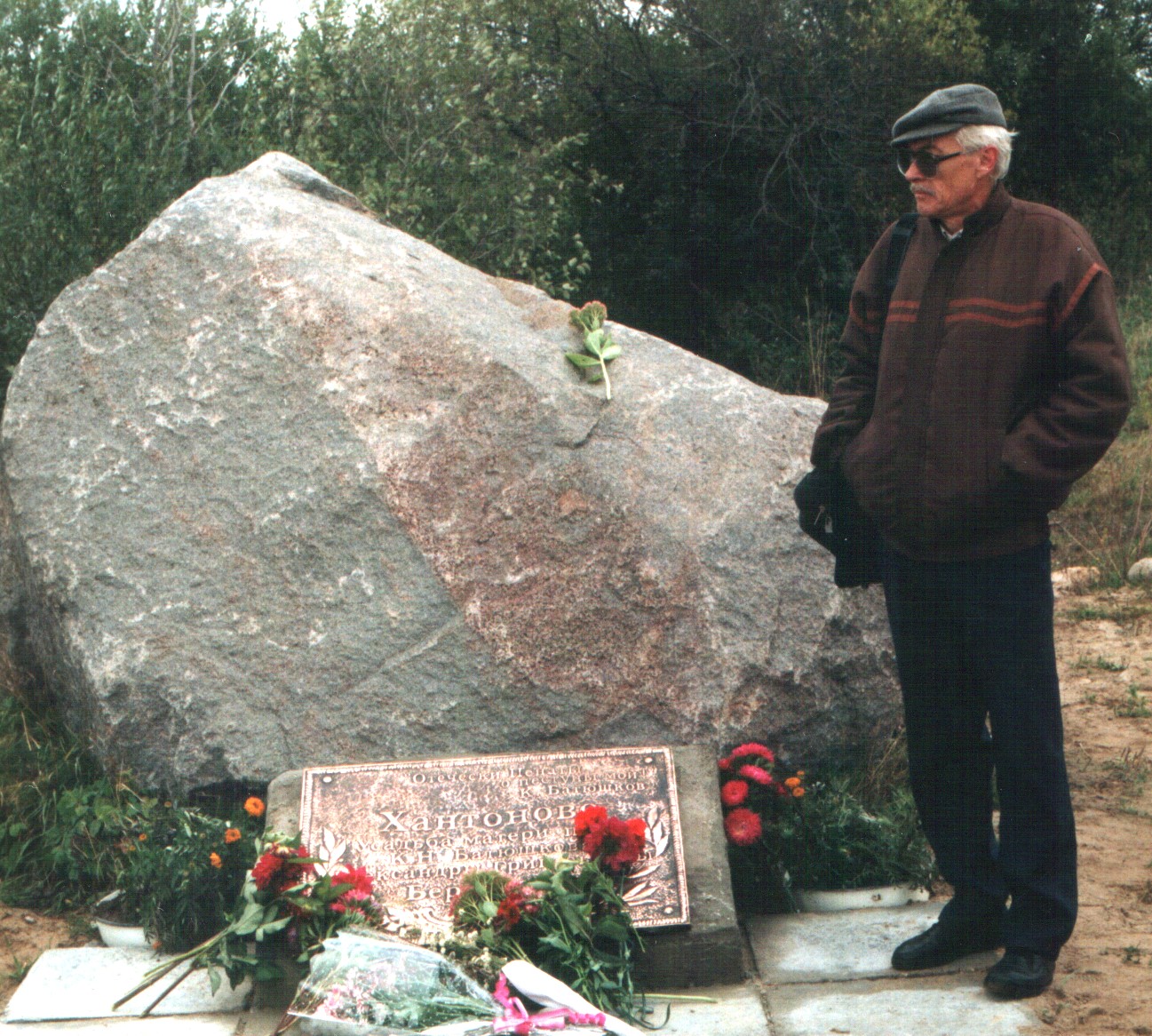 Honored art worker of the RF, the member of the artists’ Union of the RF, D.V. Medvedev, at the memorial stone and the commemorative plaque (1997) 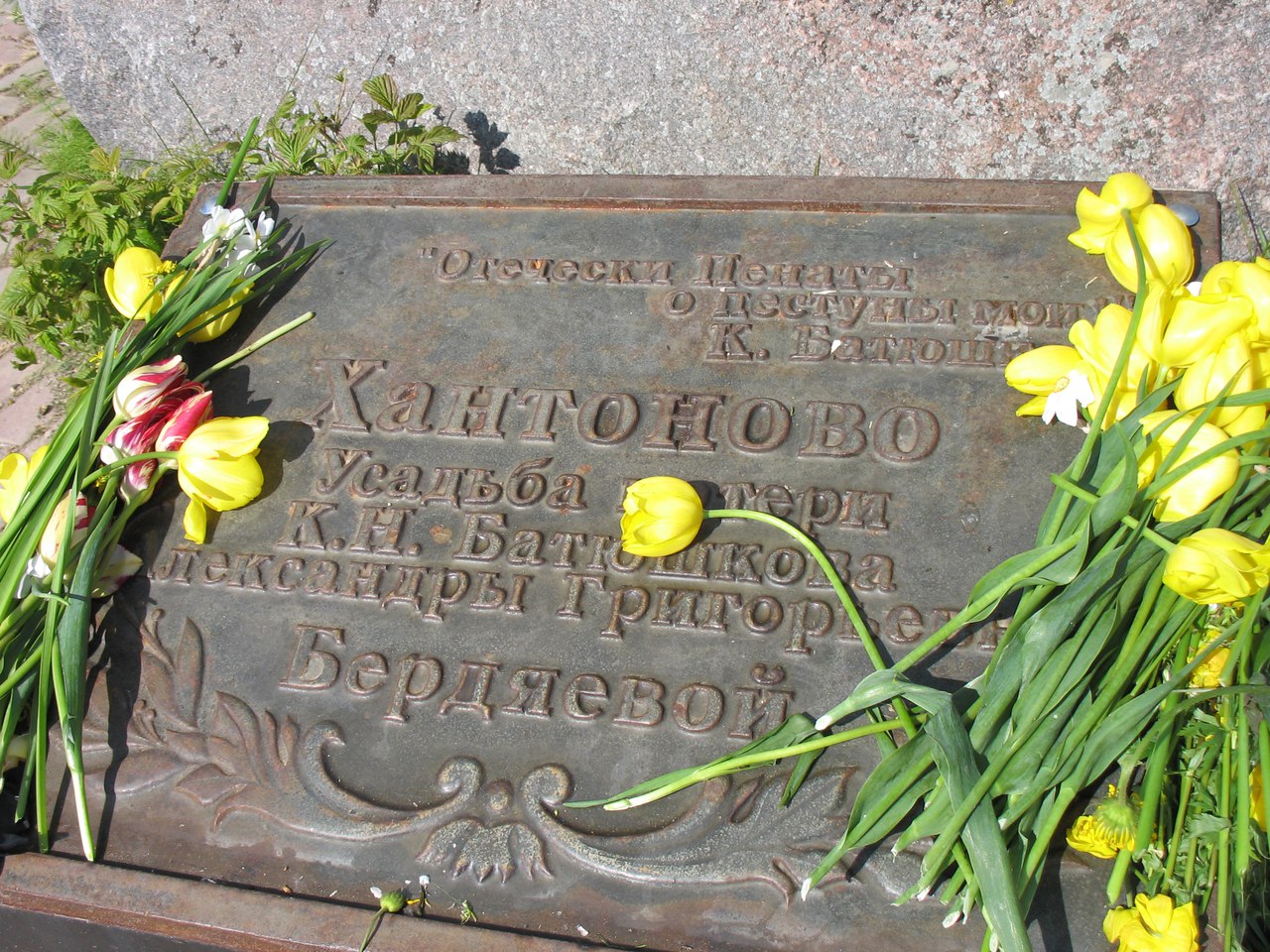 Contemporary view of the commemorative plaque

In 2013 during the regular literary and theatrical celebration “Paternal Penates”, in the presence of the head of the district N.V. Vinogradov, the memorial tombstone to the sister of K.N. Batyushkov – Varvara Nikolayevna Sokolova (Batyushkova) – was opened. Varvara Sokolova was the last owner of Batyushkov’s family estate. 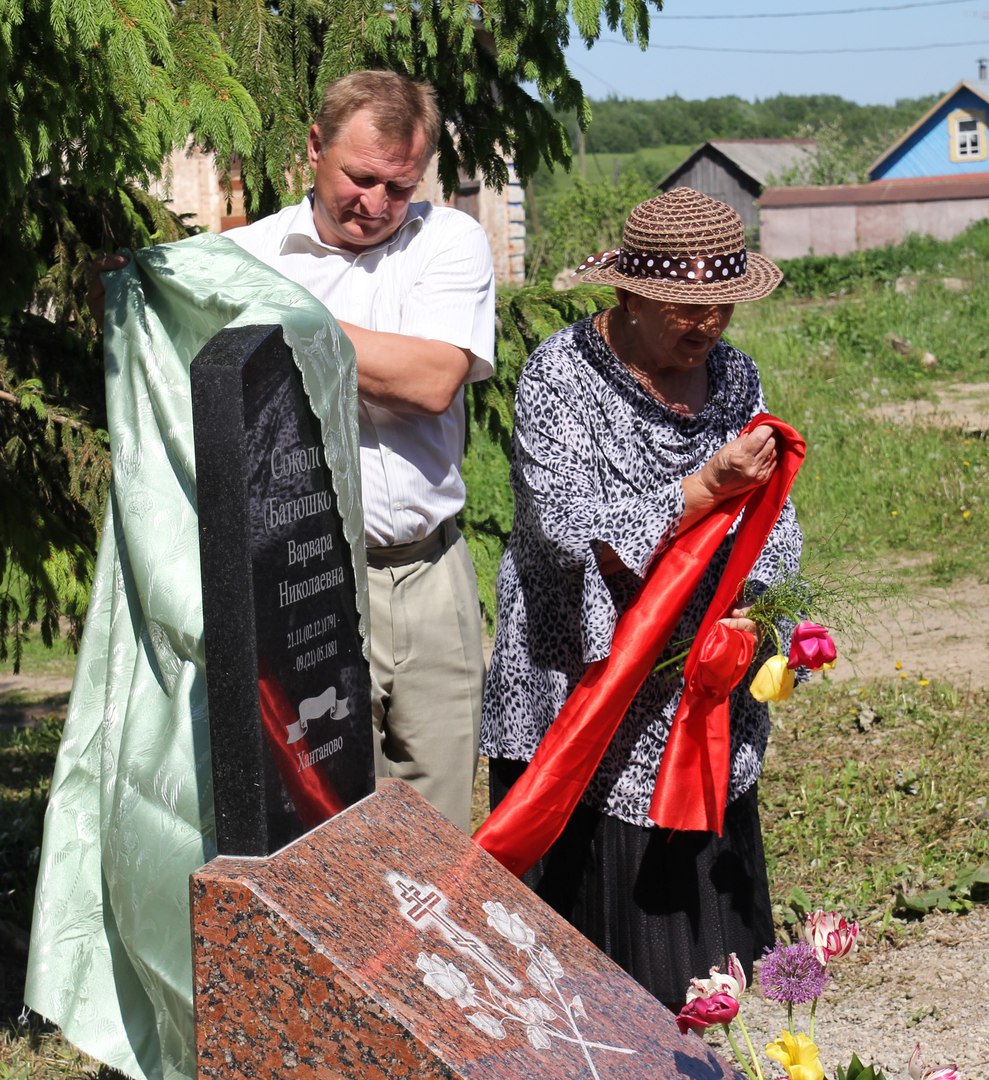 The initiative to install the memorial tombstone belongs to the member of “Batyushkov Society”, Nina Vasilyevna Fominyh (pictured right); the sketch was completed by D.V. Medvedev. The funds for the installation of the memorial tombstone were collected by the members of “Batyushkov Society”, as well as by the representatives of the public organization of Cherepovets “Mrs. Province”. The administration of Cherepovets municipal district also contributed to the installation. 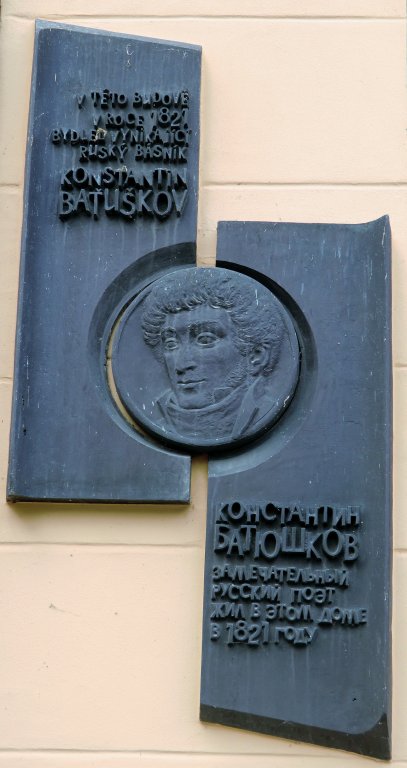 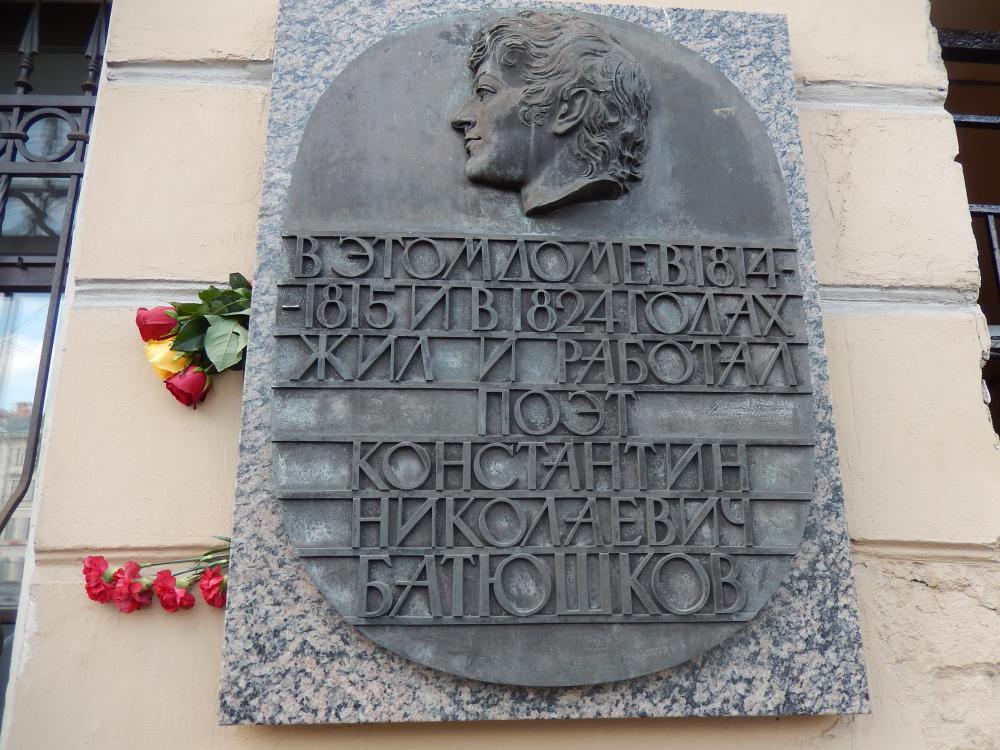 In Vologda we can find two commemorative plaques: one – on the house where K.N. Batyushkov lived 22 years separately from his relatives (the house of priest P.V. Vasilyevskiy, the parish of Ioann Predtecha, now – Sovetskiy Prospect, 20): 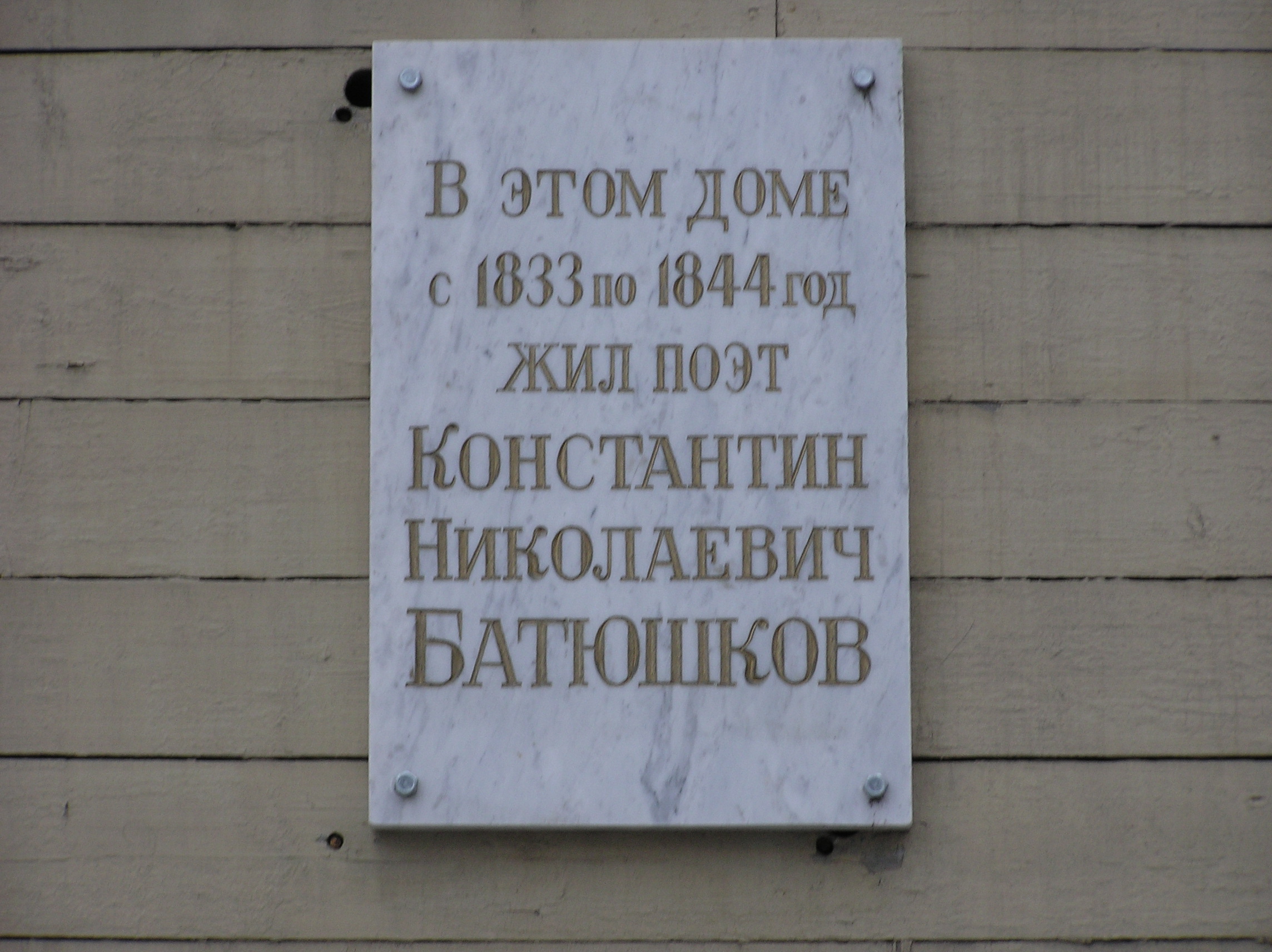 another – on the building of the specific office (Malaya Blagoveshchenskaya, now – Batyushkova street, 2), where from 1845 to 1855 the poet lived in the family of his nephew and guardian G.A. Grevens: 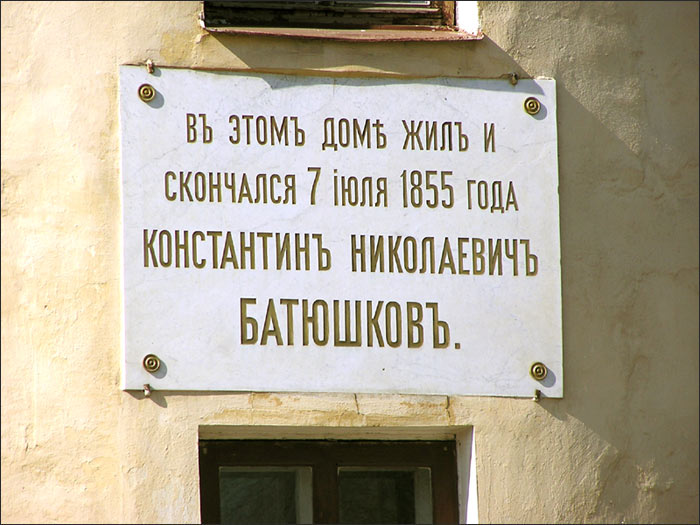 The memorial plaque is also on one of the buildings in the Crimea, where K.N. Batyushkov was treated of mental disease: 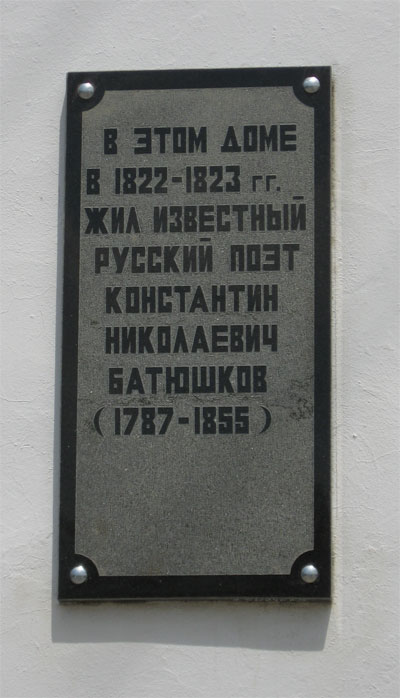 The memorial gravestone of the poet was broken during the Soviet Period and then rebuilt on the supposed burial place in Spaso-Prilutskiy Dmitriev monastery (at present – the territory of Vologda): 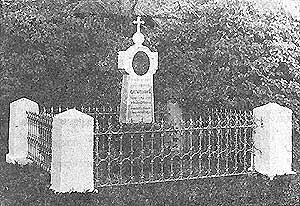 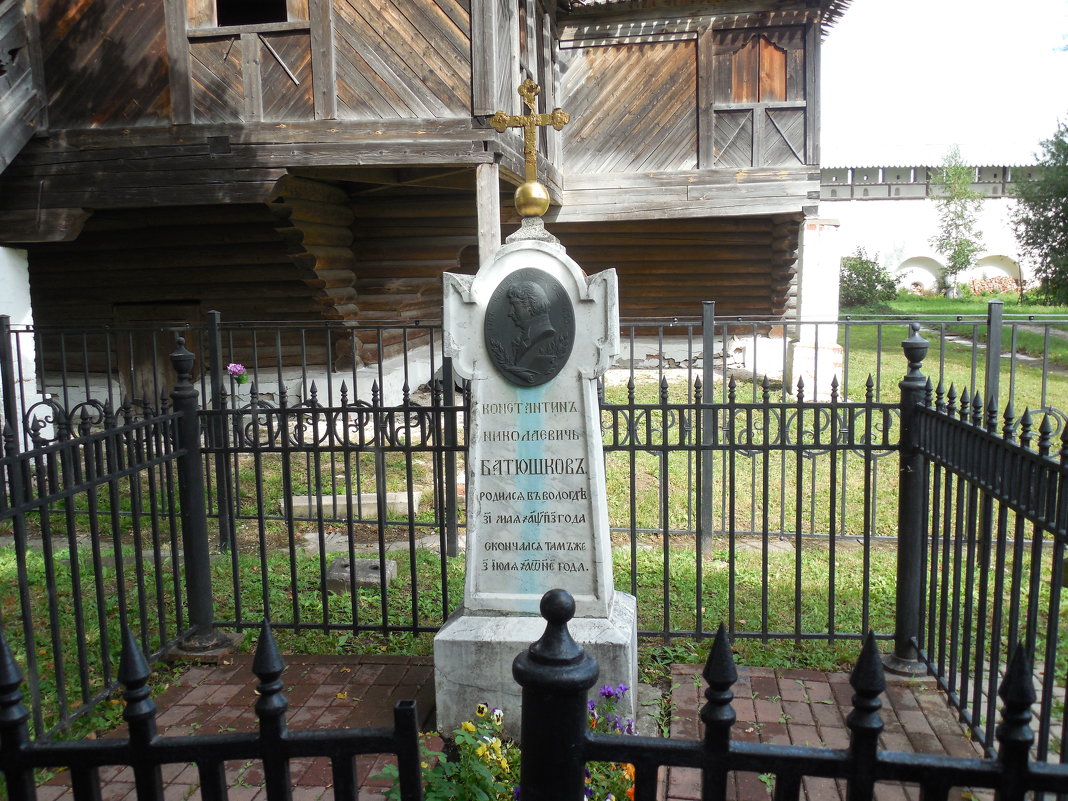 In July, 1855, “Vologda provincial sheets” wrote: “The coffin of the poet to the place of eternal rest in Spaso-Prilutskiy monastery was accompanied by eminent Theognost, the bishops Vologodskiy and Ustyuzhenskiy, the head of the province, teachers of high schools and seminaries, and all those who knew about the poet’s death and who cherished his memory as a famous writer and a fellow citizen. After the Liturgy and the burial service, made in the monastery by the Eminence; the master Archpriest Prokoshev said tombstone eloquent word…”